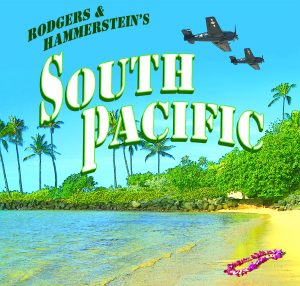 The students and staff in Loreto Secondary School and St. Peter’s College, Wexford are delighted to bring their production of Rodgers and Hammerstein’s classic musical, “South Pacific”, to the magnificent stage of the National Opera House on 10/11/12 December 2019 at 19.30 each night. This will be the eleventh joint-production between the two schools since 2002.

The 65 students in the cast have been rehearsing since early September under the direction of the vastly-experienced production team of Alan Corcoran, Fintan Cleary, Fintan Kavanagh, Elaine Morris and Sorcha O’Connor. They look forward to the full support of both school communities and Wexford’s theatre-going population as they portray the 1943 war time story set on islands of the Asian coast.

Tickets cost €10 (students and OAPs), €20 (adults) and can now be booked in the following ways:

The box office is located in the foyer of the National Opera House, High Street, Wexford.
Opening hours are Monday to Saturday from 9:30 a.m. to 5.00 p.m. On performance days, the Box Office opens for two hours prior to performances. 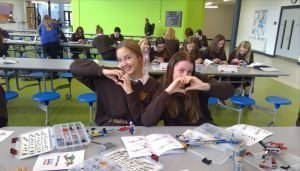 Maths week ran in Loreto Wexford from Monday, 14 October to Friday, 18 October.  There were a range of activities for students of all year groups running throughout the week. The 1st year quiz was run early in the week in base classes with many prizes up for grabs. Enthusiasm levels were high as students were very eager to be named champions for this current academic year. 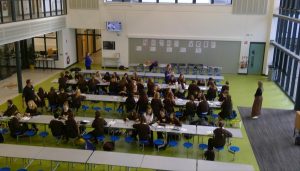 Seen in the picture above is one of our 1st year groups eagerly awaiting the next question.

Lunch times were busy with all year groups taking part in a guessing and estimation activity. This involved a walk to various parts of the school both inside and out to guess the distance between various places. The team who was the closest to the actual figure at the end of the week were crowned winners. There is no better way than being active in pursuit of mathematics.

Many 3rd, 4th and 5th year classes took part in classroom-based quizzes which were packed with problem solving activities and puzzles.

The topic of every conversation, not only among the student body, were the daily puzzles which were displayed on the screens around the school. Each day presented itself with a new challenge that students could discuss and at the end of the week give in their answers. We all hope that some of these puzzles made their way home also. On Monday a winner was picked form each year group and the final prizes were given among the victors.

Maths week concluded with a visit from ‘Bricks for Kidz’ to conduct a Lego workshop with 2nd year maths students. The workshop was extremely engaging and taught students about function and instruction. 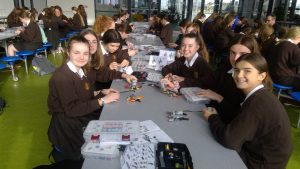 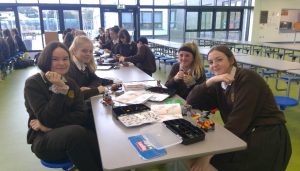 The Maths department would like to thank all staff members for their cooperation in the running of all of the events and also the students for their participation and enthusiasm during what was an extremely successful week. Here’s hoping that Maths week 2020 is even better! 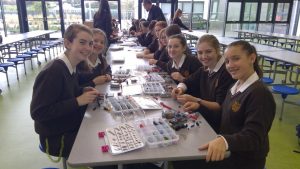 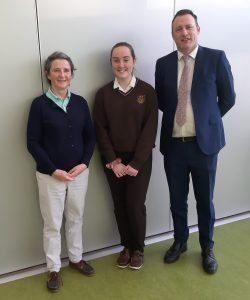 The school warmly congratulates Mia Byrne, TY student, who is on the Ireland team that will compete in the World Kick Boxing Championships in New York during the mid-term break. We wish Mia well as she competes at such a high level.

Well done to Hannah Fitzpatrick, Roisin Lawless and Sophie Mahon who competed in the Leinster Senior Championship qualifying meet on Saturday, 19 October. All three girls recorded personal best times and some top 10 finishes. Hannah and Roisin have now qualified for the Leinster Short Course Championships, where they will join Eve O’ Hanlon. This event takes place over three days, 1 – 3 November, in the National Aquatic Centre, Dublin. The school wishes them the best of luck in the competition.

The next meeting of the Parents’ Council takes place on Monday, 4 November at 18.30. All parents are welcome to attend this meeting which will finish by 19.30.

We wish all members of the school community a happy and restful mid-term break.