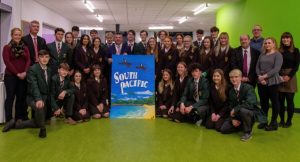 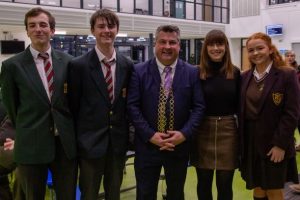 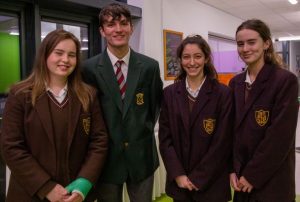 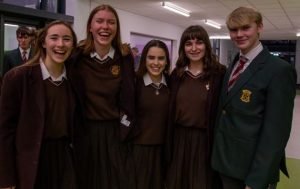 Tickets for our forthcoming production of South Pacific – 10/11/12 December, 7.30 p.m. –  are now available from the National Opera House.

Please join us for a wonderful night in the theatre and support the cast of 65 students from both Loreto and St. Peter’s. 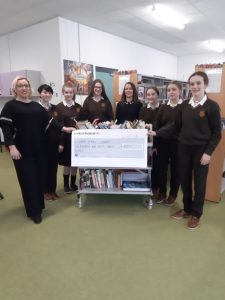 The school Library is up and running and going from strength to strength. There is now a wide variety of books for students to choose from and our catalogue is changed and refreshed often. Recently, Louise Evans (Secretary, Loreto Parents’ Council) met some of the members of the Library Committee and Ms. Kinsella. She presented them with a cheque from funds raised at the Parents’ Council Table Quiz held in April. The money will be used to purchase new books. The school is extremely grateful for the support of our Parents’ Council. 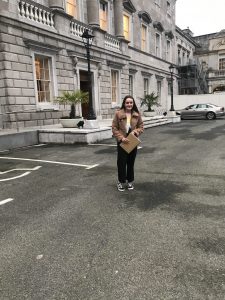 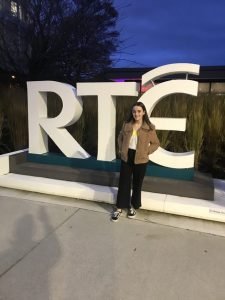 Last Friday, 15 November 156 delegates and I  were given the opportunity to take over the Dáil for the day. We took the place of the current TDs and sat in their seats for the day. We were put into groups to discuss and put forward various proposals on global warming which we hope could make a change. We discussed all the different proposals and put forward 2 proposals from each group. There were 5 groups (education, environment, food and farming, economics and power).

On arrival at Buswells Hotel at 08:30 we were escorted to Leinster House. We took our seats in the Dáil Chamber for the first session where all 5 groups were introduced and then discussed our proposals.

My group, which was to discuss food and farming, decided to put forward the two proposals “investment in industrial hemp facilities” and “ a labelling and pricing system reflecting impact on climate”. After lunch we returned to our seats in the Dáil Chamber and proposed our 2 recommendations along with 8 other recommendations from the other 4 groups. These 10 recommendations were given to the Ceann Comhairle and to Minister Richard Bruton.

Following up on the day I was invited to speak on South East radio along with the other 5 delegates from County Wexford. We spoke with Alan Corcoran for about an hour and he asked us all about the day.

It was one of the best opportunities I’ve ever received and I learned so much from it. 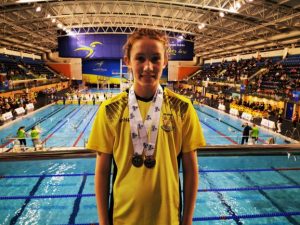 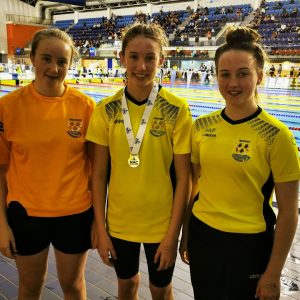 Congratulations to Hannah Fitzpatrick and Roisin Lawless who recently competed at the Leinster Short Course Championships. This was a three day event and there were many strong swims and personal bests achieved.

The NAC Invitation Gala followed. This was a one day event which saw Ruby Middleton and Sophie Mahon join the other two girls. Again, all four competed strongly. Roisin was awarded a gold medal for the 200m backstroke and a silver medal in the 100m backstroke. The next big event is the Loreto Schools Gala, which will be held on Tuesday, 3 December 2019 in the National Aquatic Centre. We wish all Loreto competitors well in this event.