Annual Report from the Board of Management to the school community

Please use the link below to the report by the Board of Management on the operation of the school in 2015/2016.

Mr. O’ Shea (Principal) will be happy to discuss any matters arising from this report. 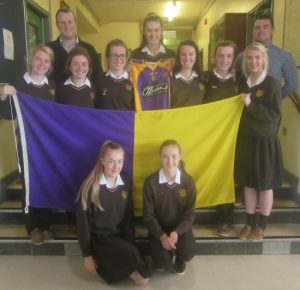 Loreto Wexford’s U16 camogie team opened their campaign with a hard fought victory over Coláiste Bríde on Tuesday, 17 October.

Loreto got off the mark with a nice point from Emma Rath. Their lead was short lived though as Coláiste Bríde went straight down the pitch and the corner forward netted after the full forward’s initial show was stopped.

Loreto didn’t panic though and added points through Ella O’Connor, Ciara O’Connor and Clodagh White. Coláiste Bríde added two points as did Loreto through Clodagh White and Ashling Alouf. Clodagh White pionted ten minutes before the break but the Enniscorthy side replied to leave the minimum between the sides at break: 0-7 to 1-3 in favour of Loreto.

Coláiste Bríde applied the pressure early on and netted shortly after the break. Clodagh White kept the score board ticking over after a well worked point. Loreto’s inside forward were alert after an initial shot hit the post and after a goal mouth scramble, the sliotar ended up in the Coláiste Bríde net. Ciara and Ella O’Connor added points and fellow club mate Ashling Alouf followed suit.

Coláiste Bríde were not lying down and their centre forward blasted to the net after the Loreto defence were caught off guard. Ciara O’Connor had the final say however adding points in the closing stages. Loreto ran out eventual winners on a score line for 1-13 to 3-4.

Loreto will be able to take positives from a grinded out victory and this will stand to them when they play tougher opposition in the coming weeks.

Loreto Wexford under-16 ‘B’ team opened their campaign on Tuesday, 13 September with a great victory over Bridgetown in the opening round of the Leinster school’s ladies football championship.

Loreto started the brighter with a goal and a point through full forward Rachel Power inside the opening two minutes. The lively full forward added another point minutes later.

Despite a poor start, Bridgetown gradually settled into the game and scored a goal but their great work was undone when Orlagh Parle blasted to the net. Bridgetown replied quickly with a point to leave the score 2-2 to 1-1 after thirteen minutes.

Bridgetown added another point before a Rachel Power free deceived the Bridgetown defence and hit the net. This was followed by a Kathlynn Gabbett point.

Bridgetown went straight up the pitch and rattled the net but this was to be their last score of the game as Loreto took over.

Fiona Kelly gained possession on the Bridgetown 45 and soloed through the Bridgetown defence scoring a brilliant goal, right on the stroke of half-time. This left the score at half-time 4-3 to 2-2.

The second half was a lot slower than the first. Loreto were well on top but failed to convert many chances. It was a very stop-start game due to the poor conditions.

Rachel Power added three more points to her tally- one free and two from play before the Loreto substitute, Aisling Murphy scored a point followed by a spectacular goal.

This left the score at full-time as 5-7 to 2-2 in favour of Loreto. This was a great team performance and they now await their second match against Creagh College, Gorey. 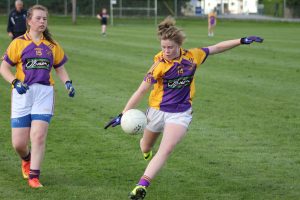 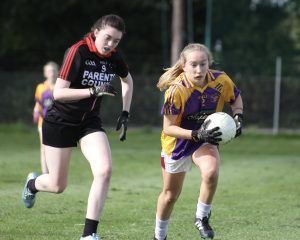 The Loreto u16 ‘B’ football team took on Creagh College of Gorey in their second group game in Pairc Chairman on Friday, 30 September.

This was a very one-sided affair and Loreto were by far the better team. Loreto got off to an excellent start when Aisling Murphy scored the opening goal from a 21 yard free inside the first minute. Loreto never looked back after this and got some brilliant scores from excellent team-work. Aisling Murphy and Rachel Power led the way for the Loreto side to leave the score at 7-12 to 0-00 at half-time.

Creagh College fought back hard in the second half but failed to break down a strong Loreto side. The final score was 10-17 to 0-00.

The Loreto team have now topped their group and are through to the Leinster quarter-finals.

Loreto Wexford’s ‘A’ football team began their season with a deserved win over Edenderry on Tuesday, 4 October.

Edenderry started the brighter with a nice point from play by their full forward inside the opening minute. Loreto’s full forward Mollie Bates replied with a point two minutes later but Edenderry took the lead again in the fifth minute through their full forward and she added a third seconds later from a free.

The Edenderry full forward added a goal which was followed soon after with an appoint for their no.23. Mollie Bates scored a fine point in the twenty fifth minute and Ciara Banville pointed on the stroke of half-time to leave the score at 3-4 to 1-4 in favour of Loreto at the break.

Loreto’s industrious full forward, Mollie Bates, opened the second half with a point but Edenderry applied the pressure and their midfielder netted in the fifth minute. Aisling Gouldson scored a fantastic goal after some great team work. Edenderry’s midfielder and Ciara O’Connor swapped points to leave the score at 4-6 to 2-5 heading into the final quarter.

Loreto made some substitutions and their backs defended brilliantly. The Edenderry full forward’s shot late on snuck past Sally Walker but it was too little too late as Loreto ran out winners on a scoreline of 4-6 to 3-5.

Loreto await their second game in the coming weeks but are in a good position after winning their first game.

Hockey season has kicked with the Minor and Junior teams travelling to Kilkenny College on 19 October to play the first matches of the season.  Unfortunately, they came back from Kilkenny unsuccessful.  The Seniors and Juniors faced their other rivals from Loreto Kilkenny on 26 October and put up a tough battle against the reigning South East champions.  The season ahead will see the 8 Hockey teams face other schools from Waterford, Carlow and Wicklow.  We are very much looking forward to training and playing on our new Astroturf pitch next year.

Elizabeth Doyle (6th Year) represented the school on the U.18 South East Team at the Interprovincial Tournament in Cork on 22 October.  Liz has been picked on South East teams for the last 4 Years.  The South East finished in 4th place with Leinster winning the title.

Meave Hayes (3rd Year) came 3rd in the Schools Combined Events in Athlone on 19 October. Meave had to compete in 5 events which consisted of the 800m, Hurdles, Shot Putt, Long Jump and High Jump.  Meave will now go onto to the All Irelands in November.  Good luck Meave.