On Friday, 6 May 2016 Loreto Wexford showed its support for Cycle Against Suicide as over 400 students and staff lined Hill Street in Wexford as hundreds of inspiring cyclists wheeled by in their orange tops. They were greeted by the girls with orange balloons and orange faces cheering loudly. What a wonderfully emotional and moving experience in supporting such a great initiative!

The main objective of the Cycle is to raise awareness of the considerable help and supports that are available for anyone battling depression, self harm, at risk of suicide or those bereaved by suicide.

The Cycle Against Suicide community is determined to let people in every corner of the island of Ireland know that it’s OK not to feel OK and it’s absolutely OK to ask for help. The key message is that, together, shoulder to shoulder, we can break the cycle of suicide on the island of Ireland. 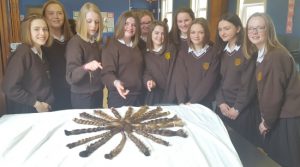 The girls were inspired by Anna’s talk as they, as young ladies, could relate to stories she told about those who suffer from alopecia. They wanted to help.

In May, a group of 4th years went around to the classes in Loreto informing the students of the foundation and the work they do. They also wanted to know if any pupils would get their ponytails cut off for the charity. Thirteen brave students then came forward and had 14 inches of their hair cut off for the charity in front of 300 students, photographers from the local newspapers as well as a TV crew and presenter from Wexford Matters.

The TY students wanted to go further and do some fundraising for the charity. It costs €3,000 for a hair piece for those who suffer from alopecia so that was their target. On the TY Graduation night, Anna Furlong collected a cheque for €3,100.

A super effort from everyone, well done girls, amazing work!