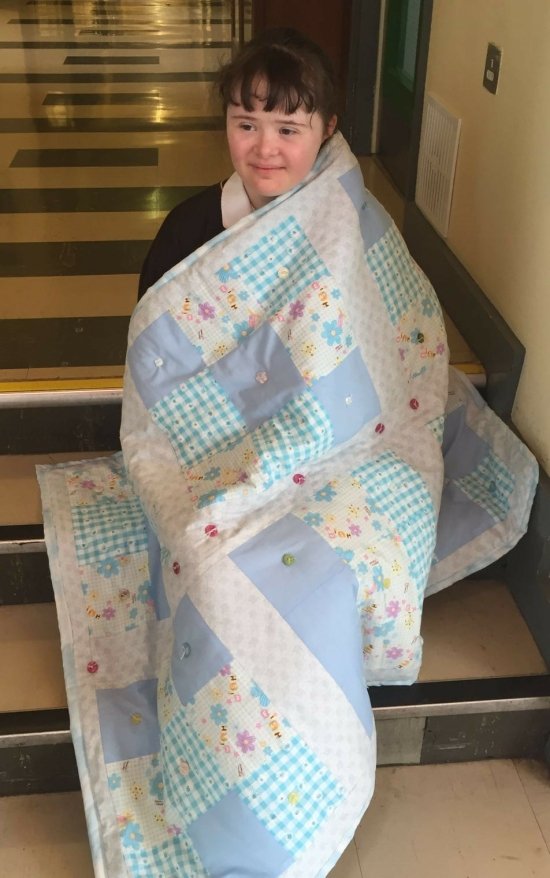 Well done to Bridget Cowman (3rd year) who has recently completed her Home Economics project. She writes as follows:

There are nine patch squares on my quilt. I picked the patches myself. They were all different blue designs because my favourite colour is bright blue. I also put buttons on my quilt. Ms Griffin gave me the boxes of buttons and I picked my favourite buttons myself. I tacked the patches together. Then I sewed the squares together. I used sashing. These are strips of material that join the squares. The part where the backing comes to the front is the binding. The binding was sewn in place using a machine stitch and a special sewing foot on the machine called a walking foot. The walking foot was needed because so many layers of material had to be sewn. I put wadding in the middle layer of my quilt because that helps the quilt to keep me warm. It looks like candy floss! I used cloud fabric for the backing. The layers of the quilt were joined together; this was done by using buttons. They were sewn in place and tied with a knot on the top. This gave a decorative effect.

My favourite part of this project was sewing in the class room with Yvonne. I like working with her because she is my best mate and she is fun and exciting. I have my quilt at home right now. When the winter comes it will keep me warm.” 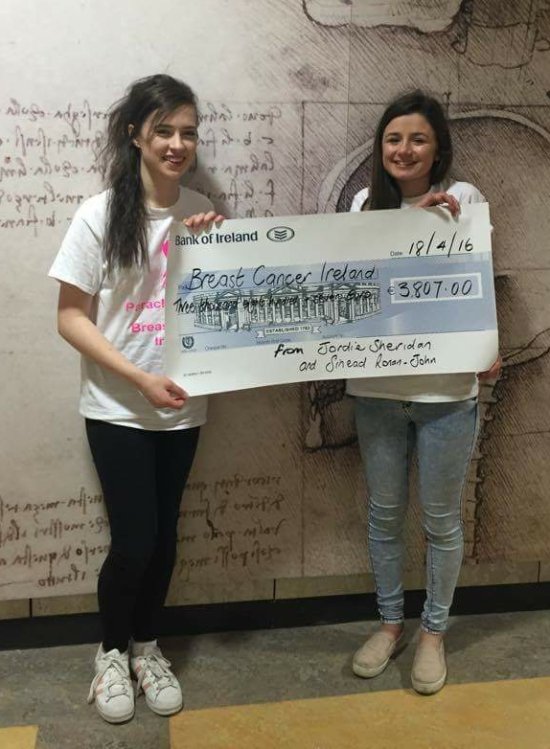 The school pays a particular tribute to two 4th year students, Sinéad Ronan-John and Jordie Sheridan, who recently undertook a parachute jump in aid of Breast Cancer Ireland. They write:

“We had decided at the start of the year we wanted to do something for charity. We then decided to do the parachute jump for Breast Cancer Ireland as this cause had affected myself and Jordie personally and within a few months we had reached the amount and over that we wanted to raise.

Sinead – we had always wanted to do something for charity so at the start of September myself and Jordie picked the cause Breast Cancer Ireland. Within a couple weeks we held a pink day in school and following that we had a bucket collection and finally a few weeks before our parachute jump we held a concert called “Performing in Pink” which was so much fun and went extremely well. The parachute jump which was on the 13th of February and was such an incredible experience for myself and Jordie. We raised a total of €3,807 for Breast Cancer Ireland which exceeded the amount we had planned on raising over. Throughout all of our work I have found this to be one of the best experiences I have ever had.

Jordie – I don’t actually remember how we came up with the idea of doing a parachute jump but it was by far the best decision of my life so far. The 6 months of fundraising was fun, stressful and exciting. During the fundraising and a few weeks before our concert a very close friend of mine was told she had stage 4 breast cancer. Hearing this news made us even more determined to raise as much money as possible. The 13th of February was the most amazing day and I wouldn’t change it for the world, I want to just thank everyone for making it possible.”

All 57 students and their teachers have returned safely from a memorable week in Villingen on the German exchange. The return leg will take place in September. This weekend a group of students and teachers head to Rennes-Pacé in Brittany on the outward leg of the French exchange.

A group of ten 5th year students gave a most informative and inspiring talk to 1st year students this week on the safe use of social media. Drawing on their own experiences and very relevant video clips, the speakers challenged their audience to look up from mobile devices and to appreciate the beauty of the people, opportunities and world around them. A link to a particularly relevant video is provided below.