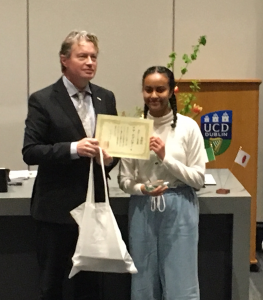 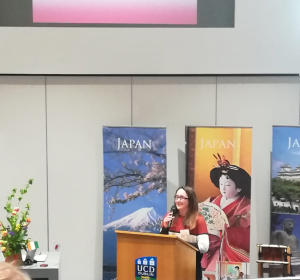 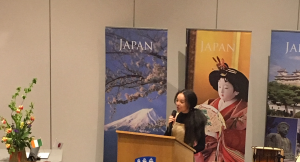 The 17th Japanese Speech Contest in Ireland was held at the Sutherland School of Law, UCD on Saturday, 9 March.

Hannah Odlum (5th year), Tiana Smith (6th year) and Ayah Abubakar (6th year) participated and Ayah won first place in Secondary School Category LC2.  Although Hannah and Tiana couldn’t win, they did very well.  After the contest, judges agreed that all of secondary students’ speeches were different and good and their performances were of a high standard.

Above all, I believe all of them enjoyed this experience and built their confidence about public speaking and for the Japanese oral.  I am really proud of them. 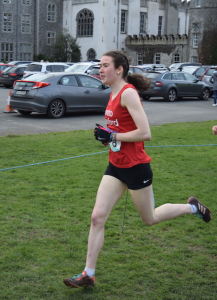 Having won a very competitive provincial race in Santry a few weeks previously, Róisín knew she was coming into some good form. However, everyone else knew this also and she was down as one of the pre-race favourites. No pressure then! Running conditions were very good with very little cutting up on a course which, apart from some tight cornering, was designed for fast running. A critical factor on the day was a persistent and strong southwesterly: nice to have on your back, not so nice if you are front-running into it.

Róisín had a very conservative start which, on a course which funnelled into an early bottleneck, left her well off the leading pace. She bided her time before moving through to the rear of the leading group over the first of two laps. When Niamh O’Mahony of Pres Tralee took advantage of the element of surprise to make an early break for glory, the ‘peloton’ chose to let her go. Róisín, with too much ground to make up on the Tralee girl, weighed up her options and remained with the pursuing group. Midway through the final lap she cut loose and moved clear into 2nd place, a position she held all the way to the end.

Róisín qualifies for the Irish team competing at the annual schools international which takes place in two weeks time in Santry.

Last week, we as a school community celebrated World Book Day. Ms. Kinsella and the Library Committee arranged many events during the week to show appreciation for the important role books play in our lives. To lead up to the official World Book Day on Thursday, 7 March, excerpts from a wide variety of genres were read over the intercom before each “Drop-Everything-And-Read”. On Thursday, we started the day giving out free World Book Day books to the 1st and 2nd  years and handing out book tokens to 3rd years and up. Students could also dress up as their favourite book character and an exceptional effort was made into making costumes. In addition to this, there was a book emoji competition held for all years. Students had to guess the book title through emojis, and the winners received book voucher prizes. Overall the week progressed quite pleasantly.

The Library Committee also appreciates all those who donated books for our new library. After all, the books you give will be used by you. Like Dr. Seuss said, “The more that you read, the more things you will know. The more that you learn, the more places you’ll go.”

Lastly, a huge thanks to everyone who contributed to making World Book Day a success in our school.

The long awaited and delayed week has finally arrived. It is Random Acts of Kindness Week. A week where random and completely unexpected things may happen in an effort to make you smile. This year we took inspiration from both old and new to create a very eventful week.

Firstly, a large display was put on in the general purpose area to establish the week. Sweets were given out at the door each morning to start the day on a sweet and positive note. As well as that, random prizes were announced every day, e.g. anyone who is under 15 and over 6 foot and anyone who is over 15 and under 5 foot. It is random acts of kindness after all! On Tuesday, we surprised students with post-it notes with positive messages on nearly all the lockers in the school. After some rescheduling due to preparation for the 2nd year parent teacher meetings, on Friday, we held a Just Dance session in the sports hall. Next to this, a bubble stand was set up where we gave out bubble wands and played music. We encouraged students to wear green accessories on Friday to tie into  St. Patrick’s Day and Seachtain na Gaeilge. ‘Secret Friend’ was also organised in each class where every person is assigned another person that they do something nice for anonymously, whether it’s leaving a nice note in their locker and or maybe some chocolate.

Next on our agenda, the much anticipated planning of Sports Day! 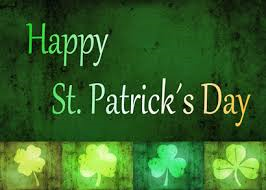