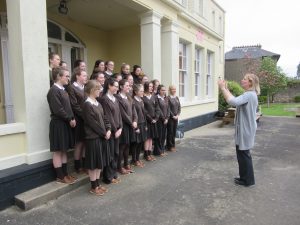 The school officially begins its period of celebration of the its 150th anniversary with the following events planned for the week ahead:

We thank Brendan Rossiter for doing such a fine job on decorating the front of the school and the foyer.

There were two nominations for the two positions of parent representatives on the new Board of Management that takes up its three year term of office on 15 October 2016.

Next week we will welcome 58 students and four teachers from our twin school in Villingen, south west Germany who will be with us until 21 September.

During the week they will join us for timetabled classes, will join in the 150th anniversary celebrations and will also undertake trips to local historical sites and Dublin.

The school is most appreciative of the detailed planning that the German Department in Loreto, as well as the teachers from Villingen, put into this annual event.

The AGM of the Loreto Parents’ Association will take place in the school at 7.00 p.m. on Monday, 19 September 2016. All Loreto parents are invited to attend.

The school extends its best wishes to its 120 students who will receive their Junior Certificate results in the school at 9.00 a.m. on Wednesday, 14 September 2016.