Again, this year, the Loreto Wexford community celebrated Autism Awareness Day on Friday, 27 April. As always, the day was based around the word ‘inclusion’ with a blue theme throughout the school building.

Our foyer was colourfully decorated with facts and figures all about Autism. The information included statistics, examples of famous persons with Autism and a powerful piece written by one of our own students, who herself has Autism. There was also a Nail Bar in the foyer with our wonderful SNAs on hand, volunteering to paint blue nail varnish for 50 cent. Intercom announcements were made by the Students’ Council, explaining the celebratory day and reminding each student to always be inclusive.

A cake sale was organised by the students, with blue themed cakes and treats, in the lunchroom. The room was buzzing with excitement as girls with blue noses and faces painted cleared out the desserts. The school not only showed their support with face paint but each of the staff members and students were encouraged to wear a blue item of clothing- socks, shirt, hairband, bracelet- which filled the school with a supportive atmosphere. The day was such a success and we’re proud to say we raised €314 for Autism Ireland. A massive thank you to all the staff and students who were involved in making this day so successful!

Not only is Autism Awareness Day about inclusion but it is also about celebrating our unique qualities that make us who we are. Being unique and showing our differences is scary at times, but on a day like that Friday where the entire school body comes together to celebrate uniqueness as one, it shows us that we are supported here to be ourselves. We can grow in an environment that accepts differences and urges inclusion. It is really something special. 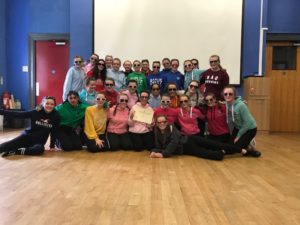 This year’s overall winner of our annual 1st year Dance and Choral Competition was the 1.1 class. Congratulations are extended to all the class and especially to the two choreographers, Niamh Cullen and Eabha Carty, for their huge commitment to this project. The class danced to a medley from the movie “The Greatest Showman”.

Huge congratulations to all the other 1st year classes who performed so well on the day. 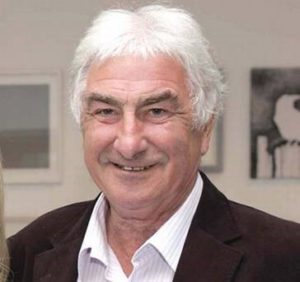 On Monday, 23 April the Justice and Peace Committee, along with the help of our teacher Mr. Gunning, organized and attended a charity talk. This talk was also attended by several other Leaving and Junior certificate Religion students. The talk was given by former sports journalist and founder of Goal charity organization, John O’Shea.

John talked to us about how he changed career from being a sports journalist, to volunteering all over the developing world, which he called the “Forgotten World”. He explained how he started his mission to help others by being involved with the Simon Community. However, he soon realized that he wanted to do more. John then discovered that one third of the population in developing countries die from starvation. This was when he decided to start an organization which he called Goal to help people in the developing world. John wanted to bring people together to help the forgotten world. He used journalism to help sustain himself while also working on his passion of helping the developing world.