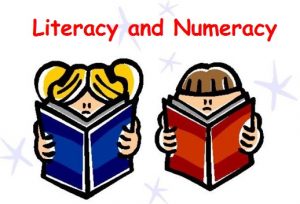 Loreto Wexford recently participated in Maths Week 2016. This is a national event which takes place in schools all over Ireland each October. In Loreto there were Maths puzzles and riddles announced over the intercom each day with daily prizes for the winners.

There was also displays of Maths facts and jokes around the school.

Two extremely fun lunchtime events were also arranged. On Wednesday, a Maths Circuit challenge was organised. Over 80 students moved around the Concert Hall trying to solve Maths puzzles within time limits. There were prizes awarded for the quickest team of girls from each year.

On Friday, Mr. Grant organised a Maths Treasure Hunt around the school. Large numbers participated and again prizes were awarded to winners from each year group.

The level of participation in Maths Week was excellent and hopefully it is an event that will continue in the years ahead.

Drop Everything and Read

The last week of October was Drop Everything and Read (DEAR) week in Loreto. Students from all year groups dropped what they were doing each day at 10.33 am and grabbed a book to read. Teachers also read a book during this time. There was silence across the school for twenty minutes each day as students and teachers alike delved into the wonderful world of reading.

It is hoped to run this initiative again later in the year. Special mention must go to the 4th year students who helped ensure the Little Loreto Library was stocked with books for the week.

The school extends its best wishes to students who will be taking class tests on 28/29/30 November. Reports will be issued on E-Portal before Christmas.