“Are we there yet?” – report by Alanna Fusciardi Wallace, 5th year student 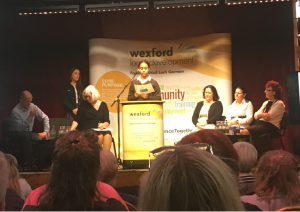 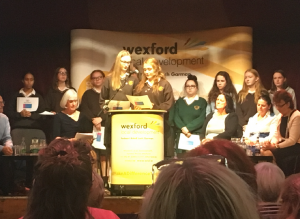 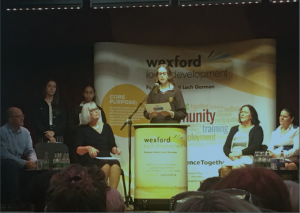 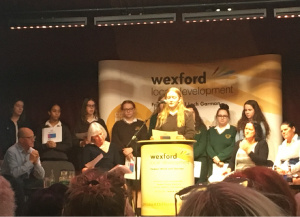 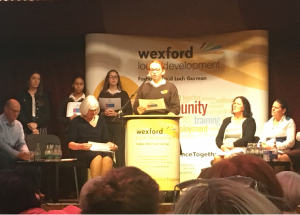 On Saturday, 13 October the Justice and Peace committee attended the ‘Are we there yet?’ Equality for Women in Ireland event in the Spiegeltent. The event was organised by Wexford Local Development and the committee was invited along with representatives from other schools in the county to speak at the event. Each girl read a statement of ‘what we want for women in the future’.

Clodagh Wilson and Sinead Rafter read a longer piece about the perspective of today’s society as young women.

Some of the other speakers at the talk included:

All these inspiring women gave their take on the place of women in today’s society and how they got to where they are now. Various topics were covered from the importance of positivity for self-esteem, well-being and overcoming barriers to women’s participation.

Later on more speakers were introduced such as Ciarin De Buis, CEO of Women for Election, Nora Furlong, a youth worker and Brian Kehoe, head of Wexford Local Development. This part of the event was a panel discussion involving the audience. It was very informative and gave great insight to women’s position particularly in politics in Wexford. For instance, in Wexford we only have 4 women councillors out of 34. Ciarin De Brun remarked that it takes a remarkable women to be elected in government, whereas a man can be unremarkable and be elected, we need to get to  a position where an unremarkable woman can be elected into government. It concluded with musical performances from Micheal D’Arcy and Rachel Grace.

Overall the event was thoroughly enjoyable and educational. It showed the work that will be involved to gain true equality in Ireland and some of the strong women who are doing that work. The Justice and Peace committee would like to thank Wexford Local Development for putting on the event and inviting us to be involved.

At the start of this year, Aware visited our school to deliver a mental health talk called Beat the Blues to our 5th years. This programme showed us how to think of the positives in our lives and how we can perceive and cope with stress in different ways. We were also told about anxiety and stress and how to recognise and cope with them. We were taught about The Coping Triangle which showed us how to better understand what is going on for us in any situation.

We learned that our thoughts are automatic and they can be both helpful and unhelpful and that also just because we believe something it doesn’t make it true. We were given advice on how to stay healthy especially with the stressful years ahead.

I found this talk very helpful and feel positive about the years ahead!

On Wednesday, 5 September all 5th year students attended a study skills seminar given by Student Enrichment Services. The purpose of the talk was to help the students to optimise their studying abilities.

The seminar included many valuable lessons, such as how to prioritise your available time to study, how to make a study timetable, how to maximise your study time and how to find the best method for everyone as an individual to study. Speakers also informed students of how important it is to take breaks and to continue to keep up hobbies such as sports. Without these breaks from study students do not perform as well.

The seminar was very informative and the students took a lot from it. Many of the skills that were learned can be seen implemented by many students today.

The 5th year students would like to thank Student Enrichment Services for the seminar and all their help. We also thank the Guidance Department in the school for facilitating this event.

Well done to our equestrian teams who competed in Barntown on Sunday, 21 October.

Our Open team – Maedhbh  Byrne, Alannah Lacey, Ciara Banville and Eimear Jackman  who came 3rd  in a very tough competition. Eimear also came 2nd in the 1.10m individual. The girls also won the Best Turned Out prize on the day. Well done to all, you did our school proud.

Loreto Wexford beat Presentation Kilkenny in their Leinster Senior ‘A’ Camogie Championship opener in Kilkenny last Tuesday. Having lost to the same opposition in last year’s semi-final there was no love lost between the two sides, and this was a physical and close game as expected. Loreto opted to play with the breeze and raced into an early lead. Pointed frees from Lettie Whelan (3), and a score from play from Amy O’Leary after a hand pass assist by wing back Ciara Banville had Loreto 4 points to good after 15 minutes.

Rachel Bennett then got in on the scoring, pointing from 30 yards after Sarah Harding Kenny had claimed possession in the full forward line. Aoife O’Connor scored a long-range point having caught a Kilkenny puck out, before Ciara Butler struck for the game’s opening goal from close range after a long delivery from the impressive Ella O’Connor in midfield. Presentation burst into life at this stage, scoring a quick fire goal and point in the next two minutes. With the score now at 1-06 to 1-01, the Kilkenny girls were back in the game and bombarding the Loreto rear guard. The full back line of Caitlin Carroll, Anna Hennessy and Mikeala Lanigan made some great clearances, blocks and interceptions to limit Presentation to only one more point before the break. The first half ended 1-07 to 1-02 with a point from Ciara O’Connor, who defiantly worked her way through 3 or 4 defenders before pointing off the hurl and over the bar.

Aoife Dempsey was replaced at full forward by Amy Cousins at half time, with a tactical shake up as Loreto were to play into the breeze in the second half. The Kilkenny side started brightly and had the deficit down to four points within a minute of the restart. The Loreto backs were once again under pressure, and goalkeeper Lara O’Shea expertly dealt with some dangerous long balls that were being sent in. Lettie Whelan lifted the siege by adding a pointed free before Ann-Marie Bennett finished off a great move, resulting in a point for Loreto. To their credit, Presentation came back at Loreto time and time again, and quickly had the lead back to only four points. Sarah Harding Kenny was showing well in the full forward line, winning vital possession when it went in and won two important frees which Lettie Whelan converted with minimal fuss. This left the score at 1-11 to 1-07 with ten minutes to play. The hard-working Amy O’Leary was replaced by Ashling Alouf, and Amy Cousins moved to wing forward. Amy Cousins won the next puck out; and sent a great ball across the 21 yard line. This resulted in a 45, which Lettie Whelan scored a goal from. With the score now at 2-11 to 1-07, Emma Rath replaced Sarah Harding Kenny in the full forward line. The remaining minutes of the game were played well in Loreto territory as Presentation tried to grab some late goals. It was not to be for the Kilkenny girls and Loreto Wexford held on for a great 2-11 to 1-07 win at full time.

On Saturday, 13 October, Maeve Hayes 5th year, took part in the All Ireland Schools Combined Events in Athlone. Maeve started off well with a personal best in the 60m hurdles of 9.62secs. She followed up with two good performances in both long jump and high jump, toping the high jump standings with a jump of 1.59m. She went into the 4th event, the shot putt, in 2nd position overall. She lost some ground here, but entering into the 5th and final event, the 800m, she was in 4th. Running a brave race with a time of 2.37mins Maeve held onto 4th place with an overall total and PB of 3103 points. This means Maeve is automatically selected for the Irish schools team, competing in Glasgow in the International Schools Combined Events on 3 November.

The school will be closed for the mid-term break next week and will re-open on Monday, 5 November 2018.